On June 25th, 2015, the Supreme Court announced its decision in Texas Department of Housing and Community Affairs v. The Inclusive Communities Project, Inc., in which the Court confirmed that disparate impact claims are cognizable under the Fair Housing Act. 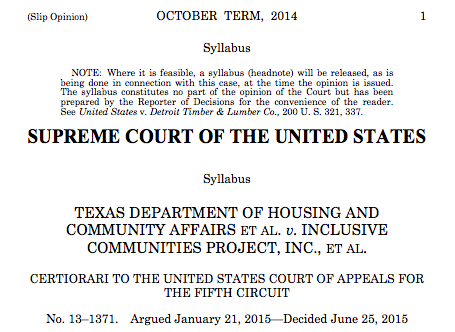 The issue in the case centered around whether the Texas Department of Housing and Community Affairs (TDHCA) had inappropriately allocated its low income housing tax credits (LIHTCs) almost exclusively to areas that were disproportionately minority in violation of the Fair Housing Act. The LIHTC program is a federal program administered by states to provide funding for the building of low-income housing.

The Department has caused continued segregated housing patterns by its disproportionate allocation of the tax credits, granting too many credits for housing in predominantly black inner-city areas and too few in predominantly white suburban neighborhoods.

In support of this claim, ICP presented data that, after 20 years of administering the LIHTC program, "92.29% of [low-income housing tax credit] units in the city of Dallas were located in census tracts with less than 50% Caucasian residents."

Racial and ethnic segregation, historically, has been caused by outright discrimination (by real estate agents and landlords), racial covenants, and redlining (read more about the history of segregation here).  The purpose of the Fair Housing Act has been to counteract this history of segregation in order to afford people of color the opportunities that exist in other locations.

After 20 years of administering the LIHTC program, "92.29% of [low-income housing tax credit] units in the city of Dallas were located in census tracts with less than 50% Caucasian residents."

The question before the Supreme Court was whether policies that have a disparate impact in that they had a greater negative impact on people of color. Legal advocates, government officials, and developers have long awaited the Supreme Court's chance to decide the issue, and ultimately, the decision has upheld the strength of the Fair Housing Act by stating that disparate impact claims are permitted under the Act.

In writing the majority opinion, Justice Kennedy concluded, "Much progress remains to be made in our Nation's continuing struggle against racial isolation. . . . The FHA must play an important part in avoiding the Kerner Commission's grim prophecy that '[o]ur Nation is moving toward two societies, one black, one white—separate and unequal.' . . . The Court acknowledges the Fair Housing Act's continuing role in moving the Nation toward a more integrated society."

The case now returns to the Fifth Circuit to determine if, under the guidelines laid out by the Supreme Court, TDHCA's policies constitute disparate impact.

For more information on how subsidized housing is segregated in Connecticut, click here.