This Toolkit is designed to provide resources on the Low Income Housing Tax Credit Program (LIHTC) for stakeholders in Connecticut and around the country. It includes:

(3) Resources of interest to stakeholders from all over the country.

What is the LIHTC program?

The LIHTC program has created or preserved over 2.5 million homes since its inception in 1986. In the first 20 years of the program it created one third of the rental units built in the U.S. At its core, the LIHTC program functions as the federal government's rental housing creation program.

How are LIHTCs handed out?

Credits are distributed by the U.S. Department of Treasury to a designated agency in each state. This agency develops a point system (called a Qualified Allocation Plan or QAP) to hand the credits out to developers in a competitive process. Successful developers typically sell the credits they are awarded to investors and use the proceeds of the sale to finance the construction of housing in whole or in part. Learn more about this process here. 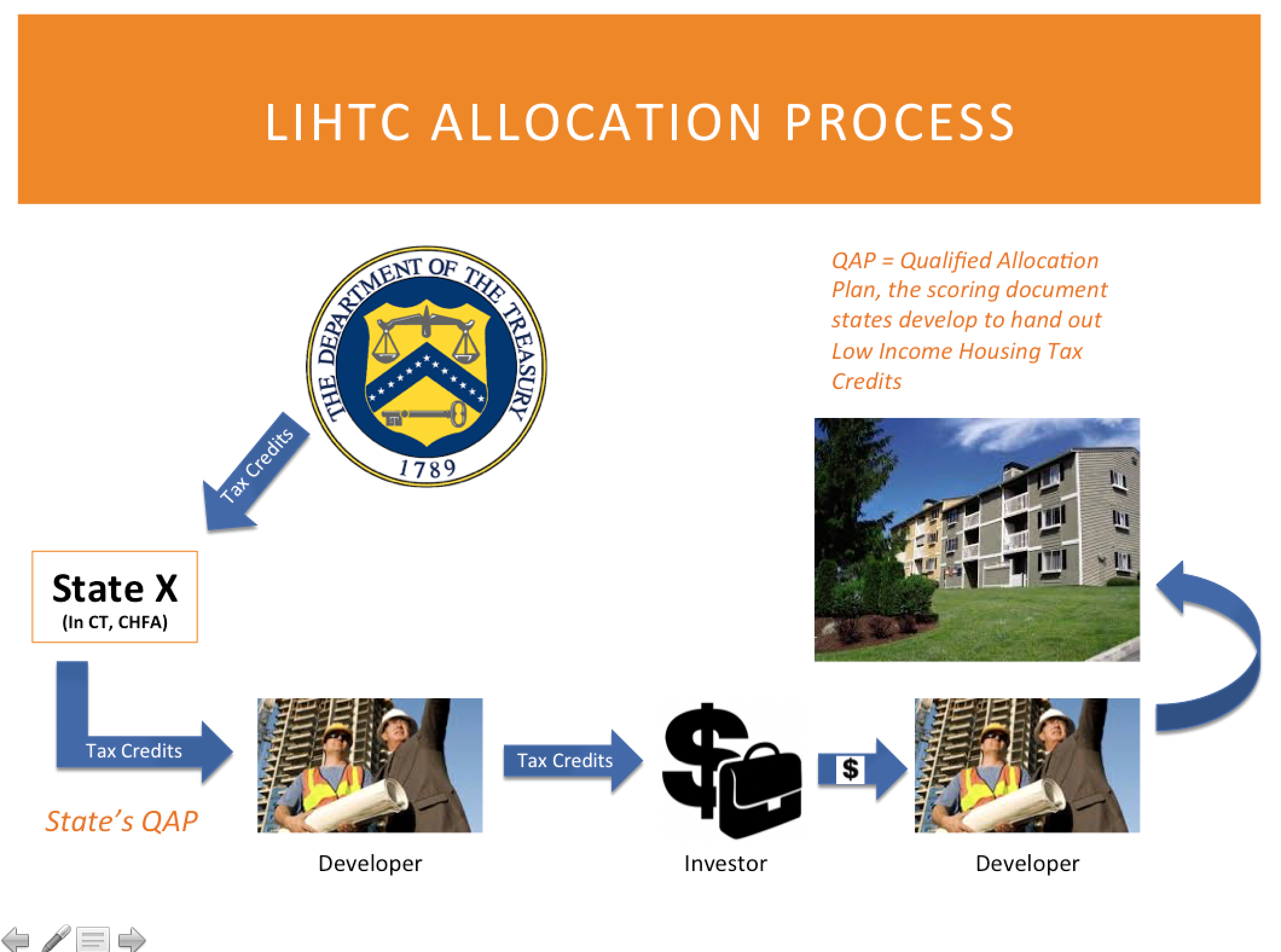 Where are units located?

Unfortunately, no matter how you cut it, in most places in the country the LIHTC

program is geographically out of balance. Units tend to be located in areas that are poverty-concentrated, under-resourced, and already have more than their fair share of affordable and subsidized housing.

Why is this a problem?

What is working to change this pattern?

With greater attention brought to the notion of access to opportunity by researchers like Raj Chetty at Stamford and his colleagues at Harvard and litigation such as Texas Department of Housing and Community Affairs v. Inclusive Communities Project, Inc. decided favorably by the U.S. Supreme Court in the summer of 2015, there is increased interest on the part of policymakers in ensuring the LIHTC program is balanced.

This has resulted in an increasing number of states infusing their programs with priorities designed to promote balance.

This is also leading to changes within the program itself, such as a change in the definition of "Difficult to Develop Areas" which, along with Qualified Census Tracts, allow for a "basis boost" for developments placed in such locations. 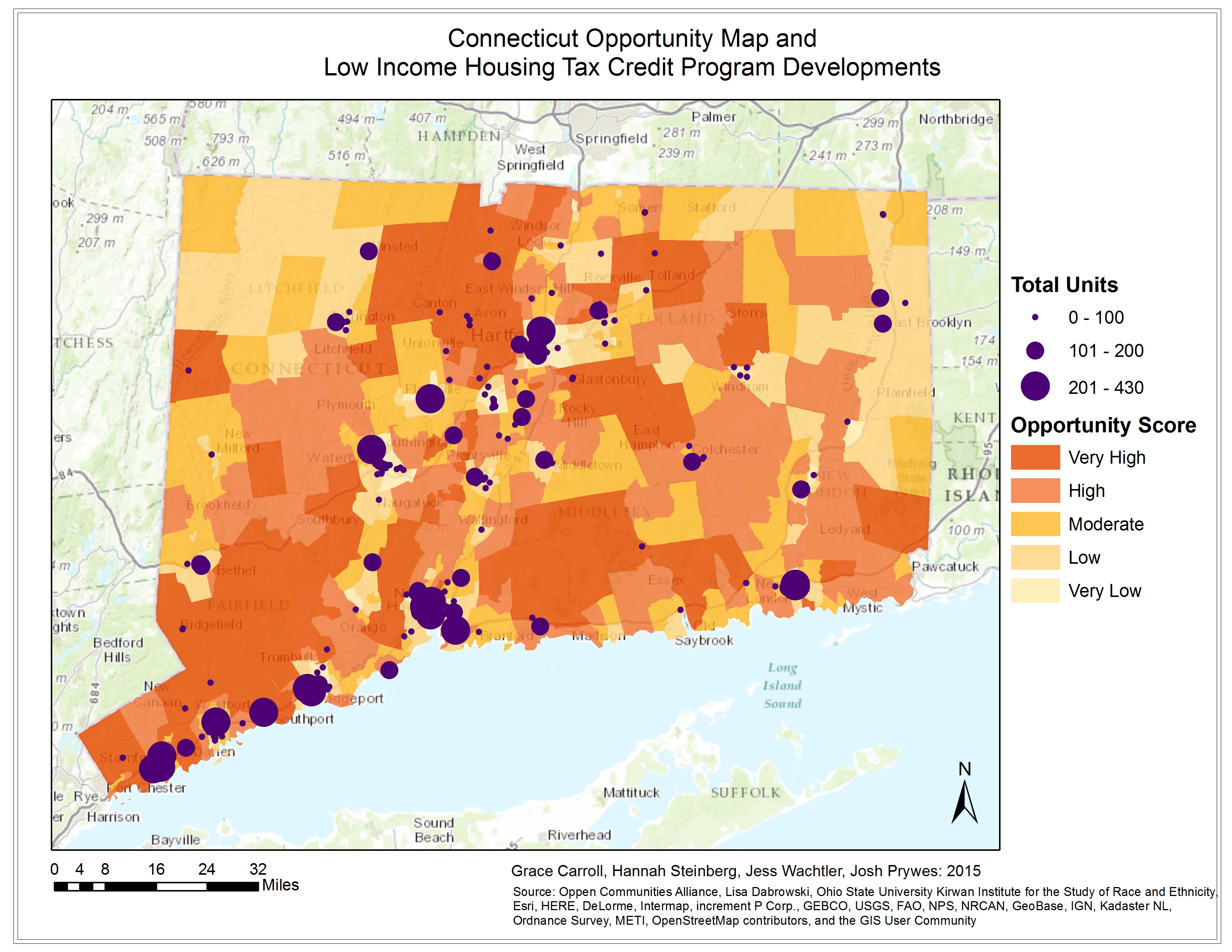 To make up for the program's imbalanced history, in 2015, the Housing Committee of the Legislature passed a bill, HB 6640, that would allocate 75% of LIHTC resources to higher opportunity areas and 25% of credits to catalytic, neighborhood-changing developments in moderate and lower opportunity areas. This bill died at the end of the session.

While the bill was active, CHFA produced a legal memo raising concerns that this new proposal promoting housing choice was contrary to the LIHTC federal statute because it would limit the ability to prioritize "Qualified Census Tracts" (QCTs), 97% of which were located outside of higher opportunity areas at the time.

Fortunately, there is no need for such fears. The statute establishing the LIHTC program requires prioritizing developments in certain areas - (1) Difficult to Develop Areas (DDAs) (list available here), and (2) QCTs that are part of a "concerted community revitalization plan," not during the selection of projects to get credits but in the allocation of credits among projects chosen. Connecticut already recognizes this distinction, awarding only 1 point out of 102 in its LIHTC selection process.