Out of Balance: Subsidized Housing, Segregation and Opportunity in Connecticut

Too often, geography defines life outcomes for low-income families, and particularly low-income families of color. The evidence is irrefutable – neighborhood matters in Connecticut.   Children in lower income communities have less access to high quality schools and are exposed to greater health and safety hazards that jeopardize their development than children in our more affluent communities.

Our state’s challenge is to foster diverse neighborhoods that promote success for all our children. To do this, it is imperative that we undertake two tasks. First, we must identify and implement strategies that transform struggling areas into thriving communities. This is a tall order because, as a nation, our best research has yet to identify a single “magic bullet” that reliably lifts up struggling cities or rural communities in decline without fostering involuntary displacement. Solutions are more likely to be multifaceted and require long-term commitments and an ability to balance competing interests. But we must persevere.

Thus our second task is to spur policies that reverse segregation and support greater choices in affordable housing locations for low-income families and particularly for low-income families of color and other groups who have historically been denied housing choices. Our nation’s painful history of intentional government-sponsored segregation, and current seemingly entrenched housing policies, separate us by race and income. And this has consequences: Data reveals significantly improved outcomes for low-income families who choose to move from high poverty to lower poverty neighborhoods, if they have that option.

Getting this right is essential for all of us: Connecticut has an educational achievement gap that hurts children and threatens our economic competitiveness. Where a child lives and goes to school has a direct and significant impact on that child’s life chances – because we rely on property taxes to fund schools and because the opportunities available to children vary so widely among towns. One way to address this challenge is to invest further in schools and services in under-resourced communities. Another way to address this challenge is to make sure that we balance our state investments to create more affordable housing in towns with greater opportunity, to give more children a better chance to succeed. In Connecticut, we have to do both. We cannot keep asking our cities to shoulder all the burden of ameliorating poverty; and we cannot keep asking our children to wait.

Charting the way forward requires an understanding of the role that subsidized housing policies have played in promoting or limiting access to opportunity. For this to be meaningful we must have a tool to assess neighborhood characteristics and compare different areas to one another. Opportunity Mapping, combining a collection of neighborhood indicators to determine each neighborhood’s access to resources that are associated with positive life outcomes, is one such tool.

What we find when we overlay the location of government subsidized affordable housing units on Opportunity Maps of Connecticut is a consistent pattern, and in many ways an old story. Blacks and Latinos are living in struggling, opportunity-isolated areas at far higher rates than other groups. Further, government-supported affordable housing is located overwhelmingly in areas that are assessed as having fewer opportunity structures, such as higher performing schools, that lead to success in life. Because, on average, as compared to Whites and Asians, Blacks and Latinos have disproportionately lower incomes, they have a similarly disproportionate need for government subsidized affordable options. Opportunity isolation is a major driver of many racial, ethnic, and income disparities in areas such as education, health, employment and more. This geographical separation by race, ethnicity, and income contributes to deeper societal divides that undermine the fabric of our democracy and government.

The goal of this report is to engage a broader array of citizens and policymakers in exploring the causes of and solutions to the opportunity divide.  The data show that, despite our aspirations and shared goals for fairness, housing segregation persists at an extremely high level in Connecticut and denies opportunities to children and families. We can work together to create a more balanced plan for subsidized housing in Connecticut.

Opportunity Mapping and the current data available on subsidized housing in Connecticut reveal a stunning and disturbing pattern: government subsidized affordable housing is overwhelmingly concentrated in areas of “lower opportunity” and generally excluded from areas of “higher opportunity.” This pattern of housing segregation cements poverty in place, and disproportionately impacts low-income people of color and others who are unable to find affordable housing in communities with an array of resources, high performing schools, and more opportunities.

Opportunity Mapping in Connecticut generated much discussion and debate from municipal leaders, housing developers, anti-poverty advocates and other stakeholders, and led to an examination of the unequal distribution of opportunity. For some, it confirmed the notion of “two Connecticuts,” one with resources and one without. Some commentators rightly cautioned that misuse of Opportunity Mapping could result in unfair condemnation of neighborhoods that all too often face criticism and stereotyping. When we use Opportunity Mapping as a tool, we must use it wisely to lift up our state and its families while recognizing the accomplishments of residents of under-resourced communities. We must use the mapping to, in some cases, transcend assumptions about neighborhoods and, instead, base prescriptions for what a neighborhood needs on the hard numbers generated by the Opportunity Mapping analysis.

Much to its credit, the state of Connecticut adopted Opportunity Mapping among other steps to guide priorities for some of its housing programs. This report is intended to share updated analyses of this mapping with 2015 data and to document the extent to which housing subsidy programs have disproportionately placed subsidized housing in areas that already host the lion’s share of such housing.  This has been true for the last several decades and even more recently.

New and definitive research by Raj Chetty, Nathaniel Hendron, and Lawrence Katz shows that children have significantly better life outcomes including an increased likelihood of attending college, being in a stable relationship, and earning greater incomes if they grow up in higher opportunity areas.[1] This research tells us that neighborhood matters. We must work to end segregation and provide families with choices in high-resource communities AND also ensure that all communities are transformed into higher opportunity areas.

Opportunity, Race and Segregation in Connecticut

Overall, a stunning percentage of government subsidized units, typically upwards of 85%, are located in very low, low or moderate opportunity areas. For most programs, these numbers only become starker when considering housing that is not restricted to seniors (referred to as “unrestricted housing” in this report). 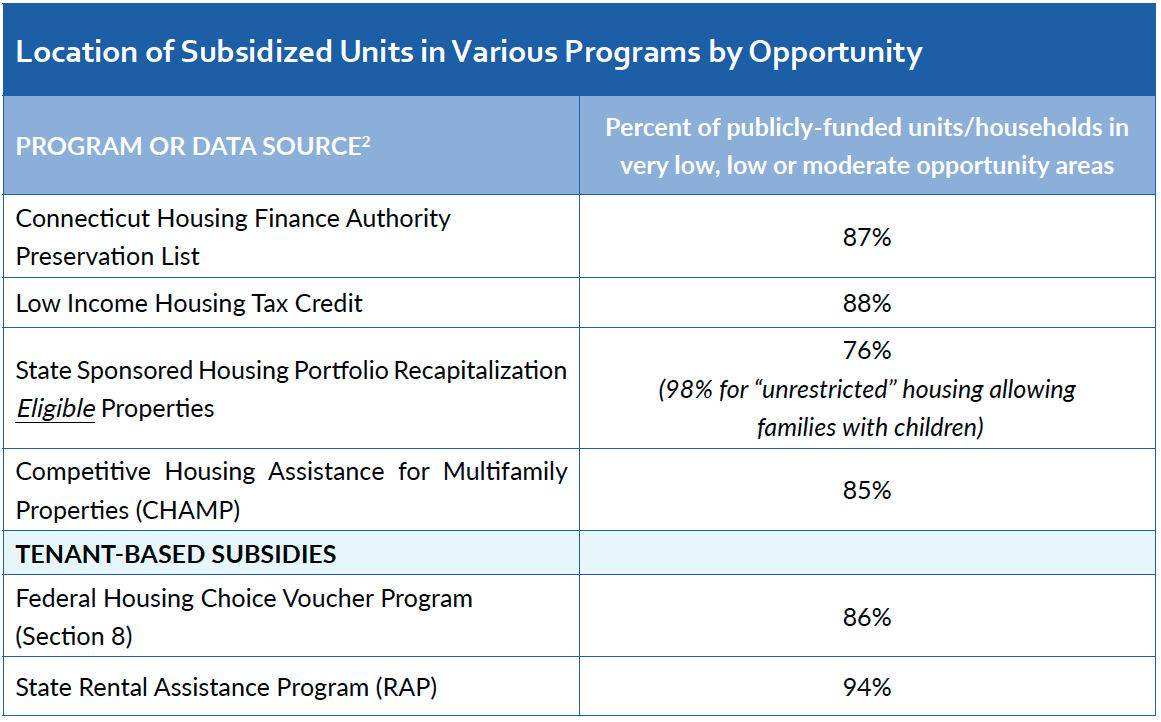 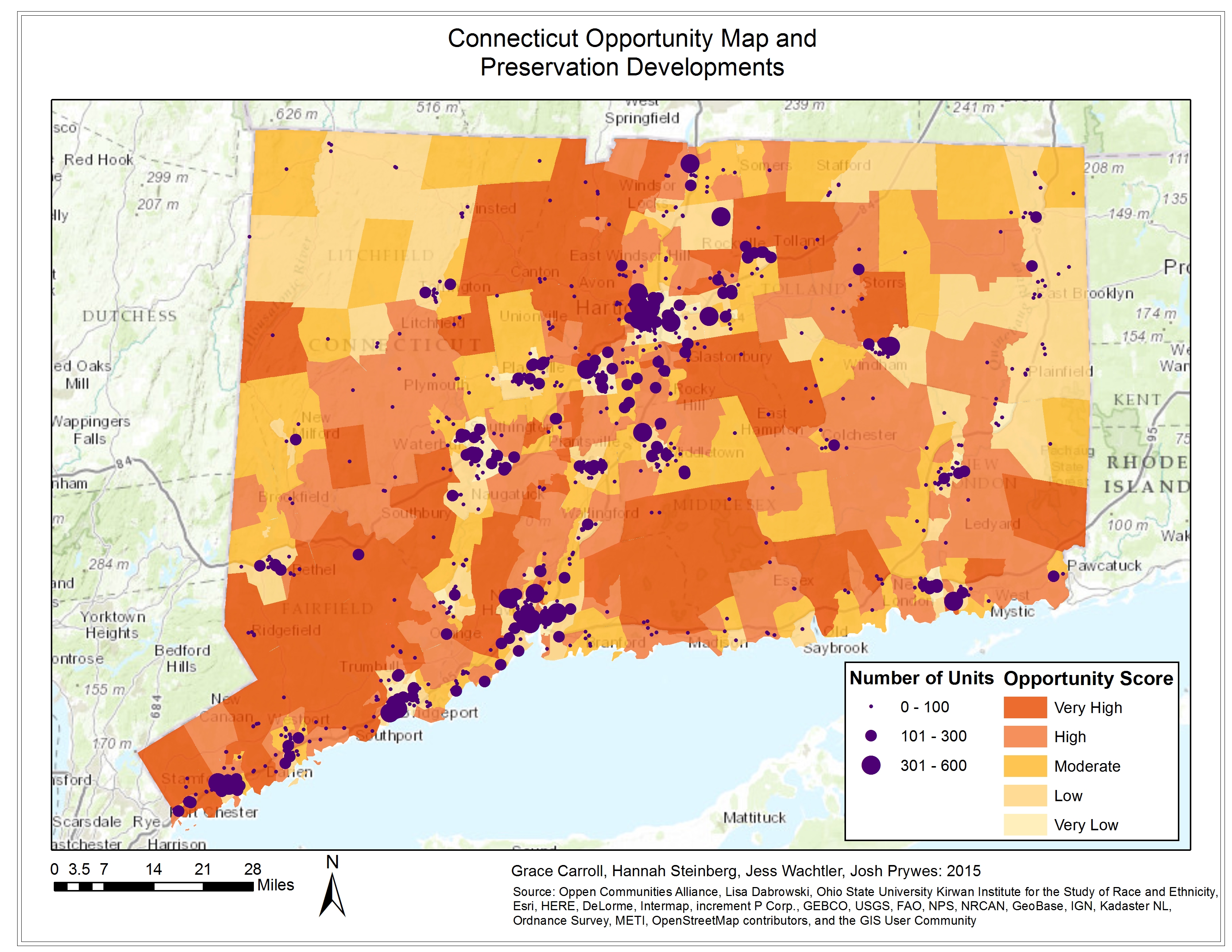 A long-term problem in Connecticut

This out-of-balance development pattern generates poverty concentration in areas that are already struggling and limits housing choices for Black, Latino, single-parent (and especially female-headed) households, households with disabilities and other families who have a disproportionate need for affordable housing. In addition, deepening poverty concentration in high poverty areas creates potentially insurmountable barriers for communities working hard to promote revitalization and stability.

Many factors affect where subsidized housing is located and, apart from program priorities articulated through application processes, local zoning is the most significant. While zoning is a state power,[2] the state of Connecticut has delegated it to towns through the Zoning Enabling Act, Connecticut General Statute Sec. 8-2. This law requires, among other things, that towns permit the development of multifamily and affordable housing. Unfortunately, through various exclusionary zoning provisions, many towns effectively prevent such housing from being built. In fact, the zoning ordinances of 25 towns do not even permit multifamily housing to be built - a violation of the state statute.[3] Such policies make the development of subsidized housing challenging or impossible in many higher opportunity towns.

There is a key nexus between local zoning and government housing subsidy programs. State government subsidy programs should offer both incentives and assists to towns and cities to promote the development of more affordable housing. First, we must ensure that government housing subsidy programs do not pose any additional barriers, beyond zoning restrictions, to locating a portion of subsidized housing in thriving communities. Second, the presence of strong incentives to locate subsidized housing in higher-resourced communities in and of itself increases the likelihood that exclusionary zoning practices will be overcome.  A high likelihood of getting the subsidy will motivate developers to contend with zoning barriers – either through effective advocacy at the municipal level or through legal challenges, including with the state affordable housing appeals process under Connecticut General Statute Section 8-30g.[4]

Last, it is important to note that deeply affordable housing, that is, housing in reach for people who are truly living below the poverty line,[5] is generally not developed in the absence of government housing subsidies.[6] To ensure that such housing is available across regions in a balanced way, the administration of housing subsidy programs must promote geographic diversity.

We can end segregation and increase opportunity for all

Despite our aspirations and shared goals for fairness, the data in this report show that housing segregation persists in Connecticut and denies opportunities to children and families – and others in need of affordable options, such as single-parent families and households with a member with disabilities. By continuing to concentrate affordable housing in lower opportunity areas, we are replicating many of the conditions of poverty that limit the life chances of future generations. Repeating this pattern in moderate opportunity areas risks reproducing past housing policy practices that generated poverty concentration. Open Communities Alliance and many other advocates in Connecticut will continue to work with state leaders and public officials to achieve greater opportunities for all.