Building multiple publicly subsidized low-income housing developments in a neighborhood doesn’t lower the value of other homes in the area – and in fact can even increase their worth, according to a new peer-reviewed study I co-authored.

For the study, we looked at 508 developments financed through the federal Low-Income Housing Tax Credit program and built in the Chicago area from 1997 to 2016. We then examined their influence on more than 600,000 nearby residential sales, using data from local property assessments and tax records. We chose Chicago because of its size, well-established neighborhoods, substantial amount of subsidized housing developments, well-documented racial and ethnic segregation, pockets of persistent and concentrated poverty and excellent data coverage. While some readers may have pictures of dilapidated buildings in their minds, the projects we looked at were generally well built and well maintained.

At this CT development, 8-30g has worked the way it was intended

Griswold Hills has 128 units in nine low-rise, well-kept buildings constructed in what is called the “row and garden” style, sort of clusters of row houses. What is somewhat unusual about the complex is not its appearance but its origin — it is a set-aside development, meaning some units are set aside for persons earning less than the median income.

This and many other set-aside developments in Connecticut were aided by a state law known by developers, housing advocates and town officials as “8-30g.”

That is the statutory citation for the state’s Affordable Housing Land Use Appeals Procedure, a process created 33 years ago to promote development of affordable housing. The law, which allows developers to override local zoning restrictions, has been highly controversial almost since it passed in 1989. There have been several efforts to abolish it, and there may be one more, depending on the gubernatorial election’s outcome.

Advocates believe Connecticut is in the midst of a housing crisis. They say the cost of housing at all levels is pricing out renters and potential owners who only a short time ago could afford their homes.

People are forced to move, these advocates say, because the apartment they could afford two years ago has now become far too expensive. For the first time in years, this has increased housing instability and homelessness in Connecticut.

The Biden White House has been publicizing America’s new Juneteenth federal holiday, celebrating the end of Black slavery and the ongoing struggle for real Black independence and equality. One of the White House’s announcements may have puzzled some people: “Exclusionary Zoning: Its Effect on Racial Discrimination in the Housing Market.”

Zoning? We might understand protecting and expanding voting rights, fighting employment discrimination, or attacking white supremacist organizations (all of which the Administration is doing.). But why highlight housing and zoning policy?

Biden’s people know what they’re talking about. America’s housing and zoning policies are riddled with systemic racism. And that continuing racism feeds long-term and ongoing negative impacts on Black incomes, wealth, and equality. Whites are much more likely to inherit wealth than Blacks, and much of that inherited wealth comes from housing equity.

Zoning for Equity: How to Reshape Zoning in Your Town 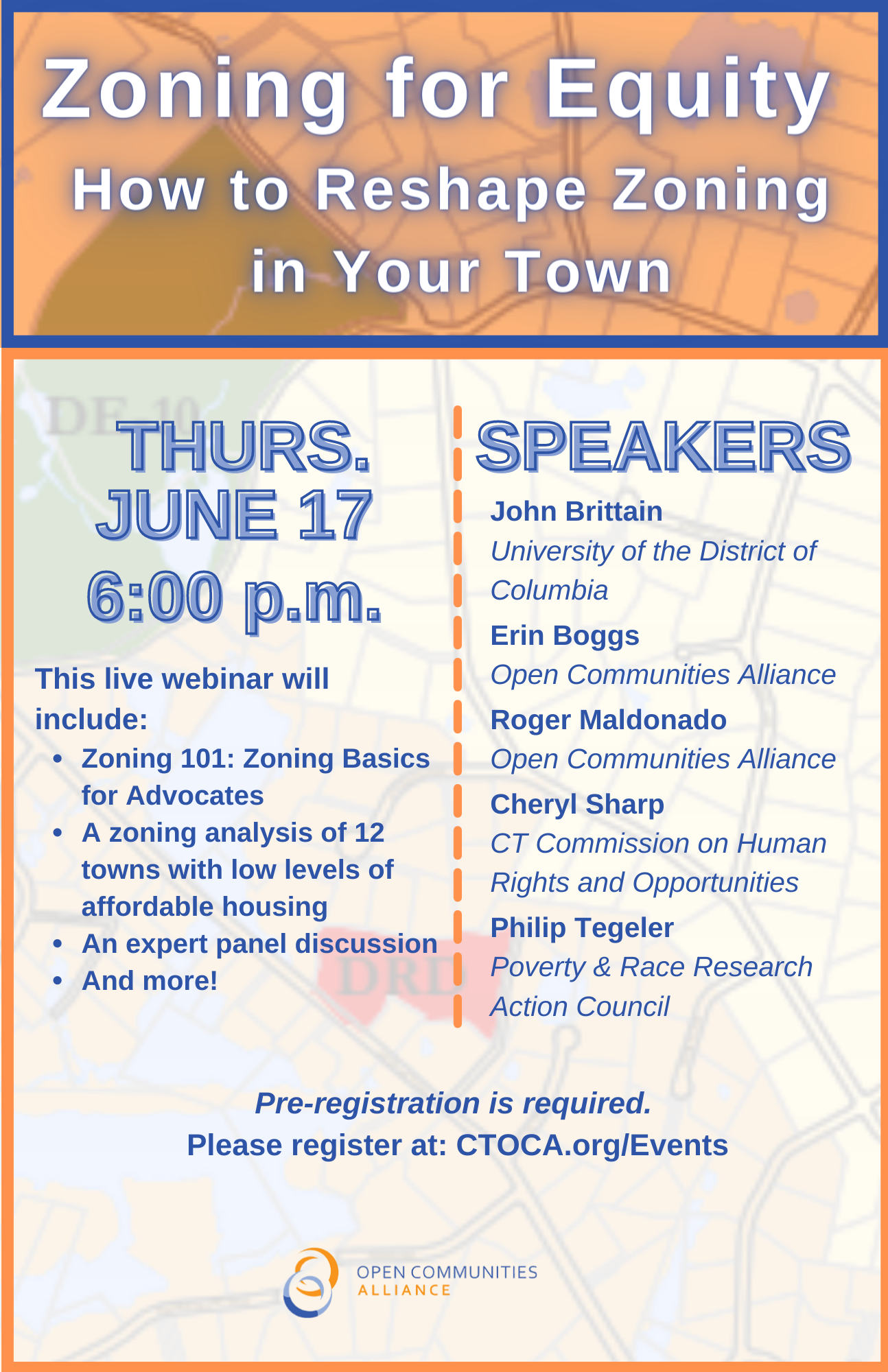 “We kind of held the place together for a long time with duct tape and bubble gum,” said Doug Denes, who served on the board of the Branford Housing Authority for more than two decades, including as chairman, until 2019.

Attempts over the past nine years to raze and replace the three deteriorating buildings have all failed, however, because of local opposition to the housing authority’s plan to lift the age restriction for the complex. Instead of housing 39 older residents, the new complex would accommodate 126 people of all ages, including families.

Some residents and elected officials in Branford, an affluent shoreline town near New Haven, have reacted with hostility to the plan, saying it would spoil the character of the community and attract undesirable people.

The Connecticut watchdog agency tasked with enforcing the state’s anti-discrimination laws on Monday will lay out the role segregation is playing to disproportionately kill Black and Latino residents during the pandemic.

“Connecticut is one of the most racially segregated states in the nation,” is how the Commission on Human Rights and Opportunities begins its 51-page report. “Segregation born of zoning policies has had a particularly deadly effect during the COVID-19 pandemic. … The effects of segregation cannot only be measured in municipal demographics or statistics of income inequality, but in lives lost.”

Housing segregation by race and class is a fountainhead of inequality in America, yet for generations, politicians have been terrified to address the issue. That is why it is so significant that President Biden has proposed, as part of his American Jobs Act, a $5 billion race-to-the-top competitive grants program to spur jurisdictions to “eliminate exclusionary zoning and harmful land use policies.” Mr. Biden would reward localities that voluntarily agree to jettison “minimum lot sizes, mandatory parking requirements, and prohibitions on multifamily housing.” The Biden administration is off to an important start, but over the course of his term, Mr. Biden should add sticks to the carrots he has already proposed.

How Biden Can Free America From Its Zoning Straitjacket

An “innovative” competitive grant program will act to eliminate these harmful zoning and land-use practices. Mr. Biden has the right goal — reducing regulatory barriers on new construction could have wide-ranging economic benefits that exceed anything else in his $2 trillion plan. But a competitive grant program is too weak to overcome the entrenched interests — like the homeowners who control local zoning boards and the wealthy residents of cooperatives who oppose all neighborhood change — that limit building in productive places.

The ongoing drive to reform land use in Connecticut may not succeed. Bringing the issue to the forefront has energized opponents as well as supporters, and since the Connecticut suburbs typically get what they want, the chances of nothing happening are significant.

But it’s been useful nonetheless in illuminating one of the state’s most deeply rooted problems and exposing attitudes that seem stuck in amber from an earlier age.

Regardless of what happens with specific bills, the state has a long way to go to achieve equity. But at least we can more clearly see where the stumbling blocks lie. And we can maybe talk more honestly about the disparities between communities that are clear to anyone who looks, even as we seem unable to solve them, or unwilling.