Support and Resources for COVID-19

This page describes the (1) data sources, (2) indicators, and (3) methodology employed in generating the 2019 Opportunity Index for Connecticut.

This analysis updates the 2014 Opportunity Index for Connecticut created by Open Communities Alliance and contributors, and is based on 11 variables from similar public data sources, as described below.

To download the data, go here. For more on the use of Opportunity Mapping in Connecticut, see the websites for Open Communities Alliance.

The Opportunity Index is computed by averaging the standardized component indicators.  In other words, the final opportunity index score for each census tract is based on the average z-score for all indicators.

The Hartford and Somers Census tracts do not have any housing units, and therefore only 4 of the variables have a value. Because these tracts do not have housing units, we are comfortable with approximating an opportunity level for these tracts because functionally it will not be relevant to decisions for Connecticut residents. Colebrook and Warren Census tracts, on the other hand, lack large enough job markets for there to be data with regard to job changes, so the opportunity index for these Census tracts was calculated from 10 of the 11 variables.

A Note on Margins of Error

Six of our indicators employ data from the U.S. Census American Community Survey (ACS).  ACS data are survey data and are therefore subject to sampling error.  Sampling error occurs when a sample is taken instead of observing the entire population, and is the difference between the sample estimate and the true but unobserved population parameter.  The Census Bureau provides margins of error (MOEs) for each census enumeration area (in our case Census tracts) for each estimate in ACS tables.  These margins of error quantify the magnitudes of sampling error, and should be used alongside the estimates in sound statistical analyses to evaluate the reliability of the estimates.  However, the magnitude of margins of error is relative to the size of the estimates, such that estimates with larger values also have larger margins of error.  As such, larger MOEs do not necessarily imply less reliable estimates.  Coefficients of variation (CVs) are therefore preferable measures to determine estimate reliability insofar as they are independent of the scale of the estimates.  The CV is equal to the standard error divided by the estimate, and as such indicates the relative amount of sampling error associated with the estimate.  We compute CVs for the six indicators that use ACS data: (i) Percent in the civilian labor force but unemployed; (ii) Share of households receiving public assistance income or food stamps in past 12 months; (iii) Share of population 25 to 64 years with some college, BA degree, or higher; (iv) Share of population in owner-occupied housing; (v) Percent of housing units that are vacant; and (vi) Percent of households with income in the past 12 months below the poverty level.

The process for computing these CVs is straightforward.  First, we used the ACS handbook to derive margins of error for the proportions that we generated using ACS estimates.  These derived margins of error employ the 90% MOEs for estimates provided by Census in the ACS.  For instance, our vacancy indicator is based on two ACS estimates (one for the numerator and a second for the denominator), and we use the two corresponding Census-provided 90% MOEs for these two estimates to generate the derived MOE for the share of vacant housing units.  We then use these derived MOEs to compute CVs according to the formula below.  CVs are provided in percentage form by multiplying by 100.  These CVs are available in this file.  Analysts can use these CVs to evaluate the reliability of indicators that are based on survey data. 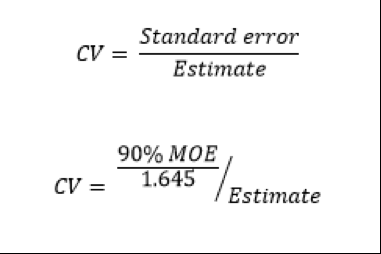